As we close the chapter on 2014 and welcome 2015, let’s revisit some of the more memorable moments by these Pack artists:

Gisel advances to the final 3 on “The Voice of Switzerland”

Gisel de Marco introduced her Latin passion and amazing vocals to Switzerland through the popular program, “The Voice of Switzerland“.  She quickly became a Swiss media favorite as the articles about her started stacking up, while the Swiss people were falling in love with her. This video was the beginning of something truly beautiful…

After hearing Australia’s Lori Greco, Fame Music Radio’s Georg Hegelmann contacted Lori and Wolfman about including Lori’s music in his programming. Wolfman subsequently invited Georg to the Facebook Pack page and that was the beginning of the new segment, “The Pack Show“, which airs every Friday evening from 7PM to 10PM Pacific Time.  Each show features live interviews with Georg, Wolfman, and The Pack Artists.  It quickly became a hit!  You can join us every Friday evening at:

Katie Thompson has been carving her pathway within the country music scene in New Zealand and touching the hearts of people around the world through her unique blend of Country, Rock, Pop, and Folk. With her win on The Audience in May, followed by her victory on Artist Signal in July, we didn’t have to wait long before we were treated to a very special music video for “Leave Your Hat On”

The Roots Project is Released on Fame Music Radio

On Friday, September 19th, Angie Arsenault joined Wolfman and Georg on Fame Music Radio as she officially released the long awaited “Roots Project” album featuring her mother, brother, sister, and of course…herself.  This was a project that was a couple years in the making, but well worth the wait!

Early in November, Perth, Australia’s Lori Greco received a phone call from the Australian Songwriter’s Association that was long overdue, informing her that she had won 1st Place in “The Spiritual Category” for her song “The Courage You Lack“, from her “No Ordinary Girl” album. 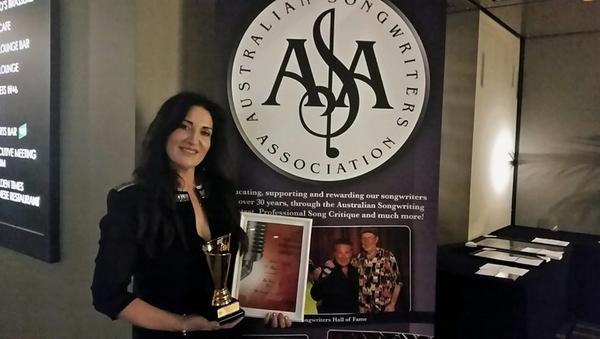 I often wonder why it takes so long for such amazingly talented artists to be recognized…better late than never, right?

Lori also received recognition for “Fly Away“, which came 6th in The Ballad category, “Running Back to You“, which came 10th in The Contemporary Pop Category, and “I’ll Be There” and “All That Matters“, both of which came in the TOP 30!  Congratulations Lori…it was long overdue!!

One of the newest artists to the “The Pack”, Nashville’s Rebecca Hosking, made us proud by closing out the year with a $10,000 first place prize on Artist Signal, as people from all over the world voiced their opinions who their favorite artist was among the over 1,000 artists competing for that elusive prize.  Congratulations Rebecca!!

2014 was a memorable year for The Pack Artists and I look forward to what 2015 brings us. What do you say we close this out in style?