Independent musicians do not have the luxury of corporate sponsorship; however, for those of us who appreciate pure, raw talent…the best way we can show our belief in them is by investing in their crowd funding projects.

This page is the launching pad for current Pack Artist crowd funding projects and contests.

For the month of May 2014: these are the current projects in full swing by “The Pack” artists: 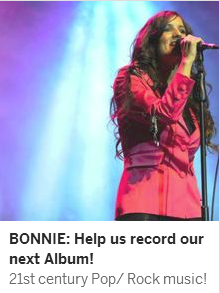 BONNIE is a Pop/Rock band from Uruguay and they are currently raising $5,000 to produce their next album.  In their first 10 days of the project, people from the US (me included), Europe, South America, and New Zealand have propelled them to 20% of their goal.  This is an amazing group that will leave you wanting to hear more.  Please visit their project and invest it it…become a part of their next album and be the first to hear their new songs! 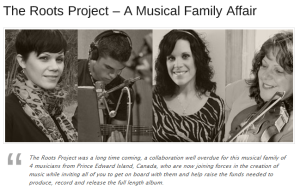 Angie Arsenault, musician/songwriter extraordinaire,  started this crowd funding project on their own site.  They are 95% funded and have recorded the music.  They are putting the finishing touches on the album before an anticipate release in August of 2014.  If you would like a physical CD of the album, you have until May 24 to get your order in.  I have invested in and have heard one song from this album and I quite honestly…it blew me away!  Hurry!  Invest now, before it’s too late! 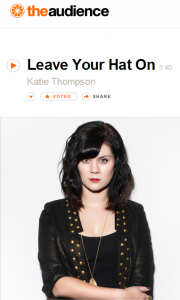 May is Music Month in New Zealand and “The Audience” is running a contest exclusively for New Zealand musicians, whereby the band or musician with the most votes at the end of the month will win $10,000 to record a single and a music video.  Voting is simple and only takes a couple of seconds.  YOUR vote for Katie Thompson…no matter where you are in the world is  monumental in its impact.  Please, visit this page and listen to her song, give her your vote, and share it on your social media pages.